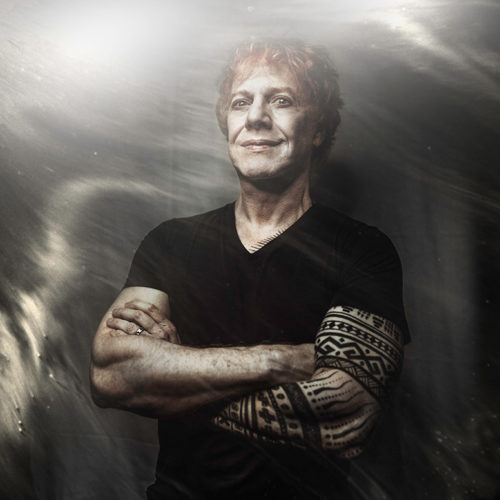 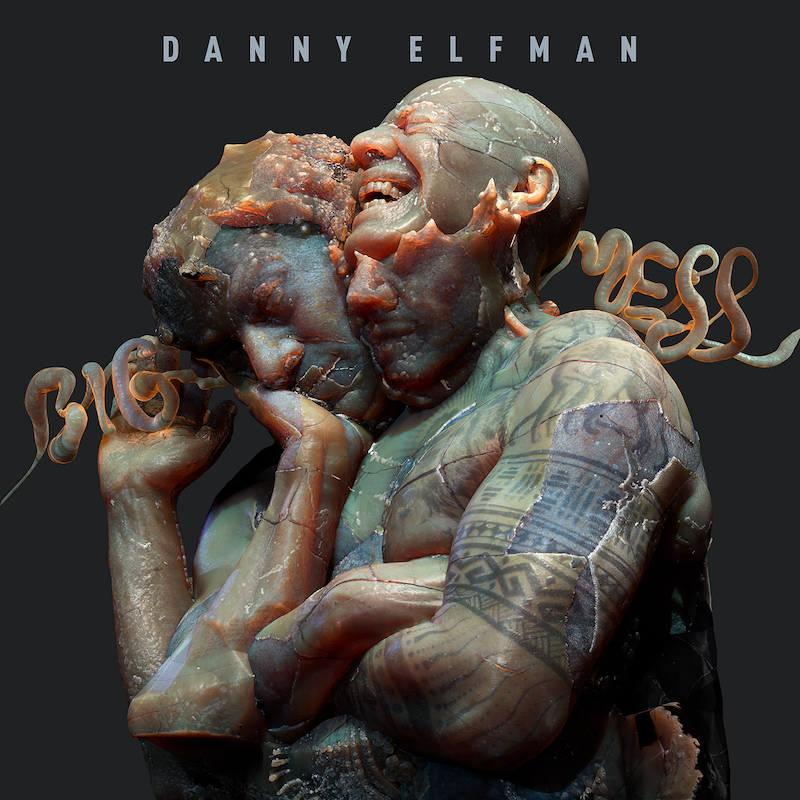 If Danny Elfman’s new album surprises you, just know that it surprised him, too.

“This wasn’t a record I ever planned on making,” confesses Elfman. “At times, I had no idea where the music was even coming from. It was all unexpected. But I decided not to resist it either.”

Driven by primal forces seemingly beyond his control, Big Mess marks Elfman’s first solo collection in more than thirty years, but it’s no return to form. Clocking in at 18 tracks, the sprawling, ambitious double album finds the Grammy and Emmy Award-winning composer breaking bold new ground as both a writer and a performer, drawing on a dystopian palette of distorted electric guitars, industrial synthesizers and orchestra in an effort to exorcise the demons brought about by four years of creeping fascism and civil rot.

The songs here call to mind everything from Nine Inch Nails, to David Bowie to XTC at times, balancing dense, harmonically complex arrangements with biting, acerbic wit as they reckon with the chaos and confusion of the modern world. Elfman wrote almost all of the record during quarantine, and while the anger, frustration, and isolation of it all is palpable in his delivery, Big Mess is about more than simply blowing off steam. In making the space to truly sit with his emotions and write without limitations, Elfman achieved a kind of artistic liberation on the record that had been eluding him for decades, rediscovering his voice and reinventing himself all at once in the process.

“When I started this project, it’d been so long since I’d done anything personal that I honestly didn’t know what Danny Elfman sounded like anymore,” he reflects. “Writing these songs was a journey in figuring that out, as much as anything else.”

Born and raised in southern California, Elfman began his career as part of a surrealist, avant-garde musical theater troupe known as The Mystic Knights of Oingo Boingo. Inspired by everything from early Harlem big band to German cabaret to Balinese Gamelan and West African percussion, the group would eventually morph into the critically acclaimed rock band Oingo Boingo, whose high-energy performances and genre-bending sound garnered them a fanatically devoted cult following in the 1980s and ’90s. Among the group’s early fans was fledgling director Tim Burton and Paul Reubens (aka Pee-wee Herman), who enlisted Elfman to score their first feature film, Pee-wee’s Big Adventure. The collaboration would prove to be the start of a long and fruitful partnership for Elfman and Burton, with Elfman going on to score a string of iconic Burton features like Batman, Beetlejuice, Big Fish, Edward Scissorhands, and The Nightmare Before Christmas. To date, Elfman has scored more than 100 films for everyone from Peter Jackson and David O’Russell to Gus Van Sant, Sam Raimi and Ang Lee, earning four Oscar nominations, two Emmy Awards and a Grammy for his work on movies like Milk, Good Will Hunting, Men In Black and Silver Linings Playbook as well as television themes for The Simpsons and Desperate Housewives.

“When I first started doing film work, I felt really unwelcome,” recalls Elfman. “I still carried a lot of punk energy with me, and so I thrived on that kind of negativity. I didn’t care what other composers thought of me. All that mattered was that directors liked what I wrote and the musicians seemed to really enjoy playing it.”

Ever restless, Elfman soon set his sights beyond Hollywood, composing his first concert works for symphonies and orchestras in the early 2000s. Once again, he found himself feeling like an outsider (this time shunned by classical purists who viewed him as a pop culture interloper), and once again, he used that doubt to fuel his remarkable success. In 2005, he premiered his first original classical work, Serenada Schizophrana, at Carnegie Hall; in 2008, his compositions for Twyla Tharp’s Rabbit and Rogue ballet made their world premiere at the Metropolitan Opera House at Lincoln Center; and in the past few years alone, he’s taken on commissions for the London Philharmonic Orchestra, the Berlin Philharmonic Piano Quartet, the Royal Scottish National Orchestra, and the Czech National Symphony Orchestra. In 2019 he also released his first Violin Concerto album, Eleven Eleven.

And so Elfman began 2020 with plans for another ambitious and unexpected project: a career-spanning live set at Coachella that would mix his film work with reimagined takes on Oingo Boingo classics and brand new “chamber-punk” compositions written specifically for the stage. Coachella, of course, didn’t happen as planned in 2020, but the months of work Elfman put into writing the songs and rehearsing with the band opened up the floodgates. As quarantine stretched on, he found himself unable to contain the deluge of new material pouring out of him. The music was surprisingly aggressive, laced with a venom Elfman didn’t realize he’d been carrying inside, and the lyrics were acid-tongued to match, skewering 21st century social and political degeneration with cathartic rage and caustic humor.

“I had all this anger inside of me, and I realized it just needed an outlet,” says Elfman. “At the same time, I was still very much in touch with the part of me that’s always been drawn to absurdism, so the songs started coming in pairs: one serious, one sarcastic; one heavy, one light. It was a very weird internal competition happening during the entire process.”

From that dichotomy emerged the vision for Big Mess, a double album exploring the yin and yang of Elfman’s artistic personality. On Disk 1 you’ll find more personal, earnest emotional reckonings focused on politics, aging, and identity; on Disk 2 there are irreverent, scathing, post-punk character studies that indulge insanity and revere the ridiculous. Elfman recorded the collection at his out-of-town home where he quarantined with his family. The minimalist setup there proved to be an ideal fit for the songs, which radiated a manic, blistering energy.

“All I had with me was a handheld microphone, a keyboard, and an electric guitar,” he explains. “I didn’t even have a functional pair of headphones, so I was recording my vocals with the playback blaring through the speakers. I didn’t care about sound bleed because it just felt so good, like I was singing onstage during a live show.”

“Because I’d been gearing up for Coachella for so long, my vision for capturing these songs was still rooted in the mindset of standing onstage in front of an audience,” explains Elfman, “and I’ve only got one level when it comes to performing live. I’m just wired to be amped up on adrenaline, charging all over the place and hollering into a mic.”

As a result there’s a definitive guitar-based core to most of the music. Elfman had also been ruminating for a while about ways to incorporate orchestral strings into rock music in a very aggressive way, and these became a presence in almost every song. Album opener “Sorry” showcases that frenetic electricity, with driving strings and swirling vocals giving way to bruising drums and snarling guitar. Like so much of the record, the song is eerily off kilter, full of unsettled tension that threatens to explode at any moment. The sardonic “Happy” twists an upbeat pop melody into a bitter social commentary, while the searing “Love In The Time Of COVID” taps into the simmering angst of life under lockdown, and the slow burning “True” faces down hopelessness and despair head on. Elfman’s vocals are gritty and growling here, and his raw unfiltered delivery only adds to the emotionally charged atmosphere.

“I hadn’t really sung anything as myself in 25 years,” he explains, “and to my surprise, I found that I could do things now that I couldn’t have done when I was younger. It was like discovering I had a whole new voice.”

Elfman isn’t shy about using that voice to share his mind, either. Big Mess is an often explicitly political record—the haunting “Choose Your Side” samples a Trump speech, and a reworked take on Oingo Boingo’s “Insects” transforms itself into a meditation on the greed and sickness of the American ruling class—but Big Mess is also a deeply personal work, with songs like the droning “In Time”, the haunting “We Belong”, and feverish “Everybody Loves You” revealing more of Danny Elfman than we’ve heard at any stage of his remarkably eclectic career.

“I knew from the start that this wasn’t going to be a neat, easy-to-categorize record,” says Elfman. “It was always destined to be this crazy cacophony, because that’s who I am. The Big Mess is me.”

And yet, taken as a whole, Big Mess is anything but. There’s a method to the madness here, a distinct beauty in the disorder. The chaos at the heart of this record is as pure a reflection as you’ll find of the man behind it, and a potent reminder that, 40 years into his career, Danny Elfman is still full of surprises.