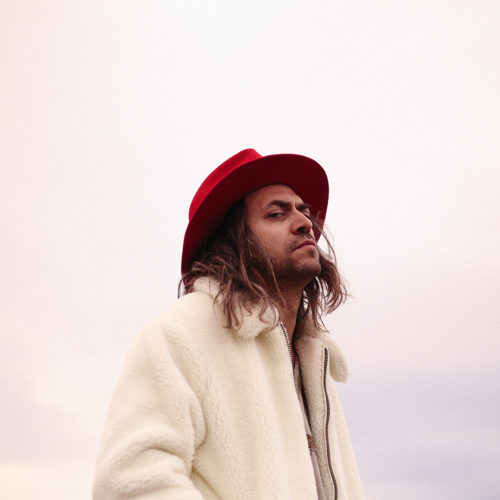 Three new things in Antoine’s life led to the creation of this album: a car, a studio, and a label. In this order of importance.

Since the release of his previous album, “I bought a car,” says Antoine Corriveau. “I drove a lot these last few years,” touring, of course, but mostly for the fun of being on the road, hands on the wheel. Escaping far from home, but still somewhat at home—PISSENLIT is a “road album,” like you would refer to a “road movie.”

The seed of PISSENLIT, Corriveau’s fourth album and his first to be released via Secret City (which put out his Feu de forêt EP in November 2018) was thus planted at the end of Route 138, “during a writing residence in Natashquan. I drove up there by myself.” Crossing Quebec from the south to the north provoked “a reflection about the territory” that we all share — but not always fairly, as can be heard on the troubling, hypnotic Les sangs mélangés.

The themes of movement and its opposite, taking root, became “a way to talk about myself through my vision of the Quebec territory, of how it’s inhabited, how it has been developed over the years, over generations.” Nomadism is depicted in En Corolla au Canada, a bluesy groove as messy as motor oil: “Je suis parti tuer le char dans les Prairies / Traverser le Canada de nuit / Même si une Toyota Corolla / Tu peux pas vraiment tuer ça” [“I took off to kill the car in the Prairies / Crossing Canada by night / Even though a Toyota Corolla / You can’t really kill that”]. An accident on Highway 10 is evoked in the pop novelty Kenny U-Pull. An abandoned house along Interstate 87 in New York State is the setting of Albany, one of the heaviest rock songs he ever recorded.

In the new surroundings of his own Studio Van Horne, which opened in early 2019, a different way of designing and recording an album emerged, shaking up Antoine’s musical style. The gestation period of PISSENLIT was chaotic. “It reminded me of my twenties, when I was starting to make music by myself at home with GarageBand. I invited musicians to come to the studio, but without sending them the songs ahead of time. I didn’t want them to prepare themselves. I recorded many tracks, then cleaned things up, putting things together,” gradually composing and recording this album, which he entirely produced.

The core band, featuring Stéphane Bergeron (drums), Marc-André Landry (bass) and Simon Angell (electric guitar and bass), was assisted by a few other musicians (Mathieu Charbonneau, Salomé Leclerc, Marianne Houle, Jérôme Beaulieu, Rose Normandin, Erika Angell, among others), priceless collaborators whose instruments enlivened the sleepless nights spent at Studio Van Horne. “I conceived this album as sort of a collage. I wanted it to be eclectic,” says Corriveau, who was partly inspired by Beck’s classic Odelay LP. “I listened to it again the year before I recorded my album, I hadn’t revisited it in a long time. I love its free-for-all quality. I aimed for that kind of abrupt tonal shifts. Surprises, really.”

PISSENLIT doesn’t so much overturn Antoine Corriveau’s sound that it grows off it, in a quasi-punk, angular, unpredictable manner, free of the string and brass arrangements that had been following him since 2014’s Les Ombres Longues. His music is even free of his signature melancholia, in part at least (you can’t completely reinvent yourself!). This left room for something resembling humour, or certainly the fun of delivering spontaneous, lively, sometimes mischievous songs. For that, you should thank Lisa Leblanc. “I ran into her during production. We talked, catching up. I told her about recording new material, and she asked me: ‘Are you having fun?’ I often asked myself that again during the recording process. It became my benchmark: having fun!”