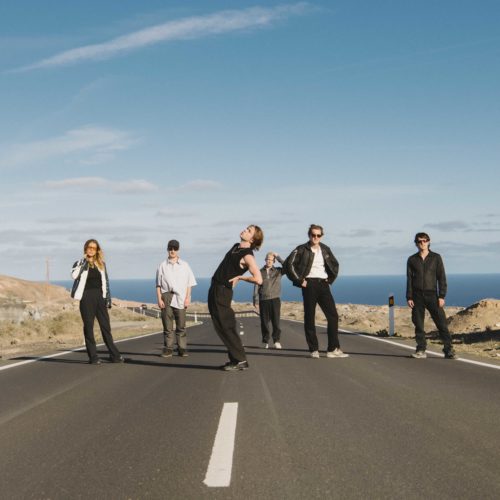 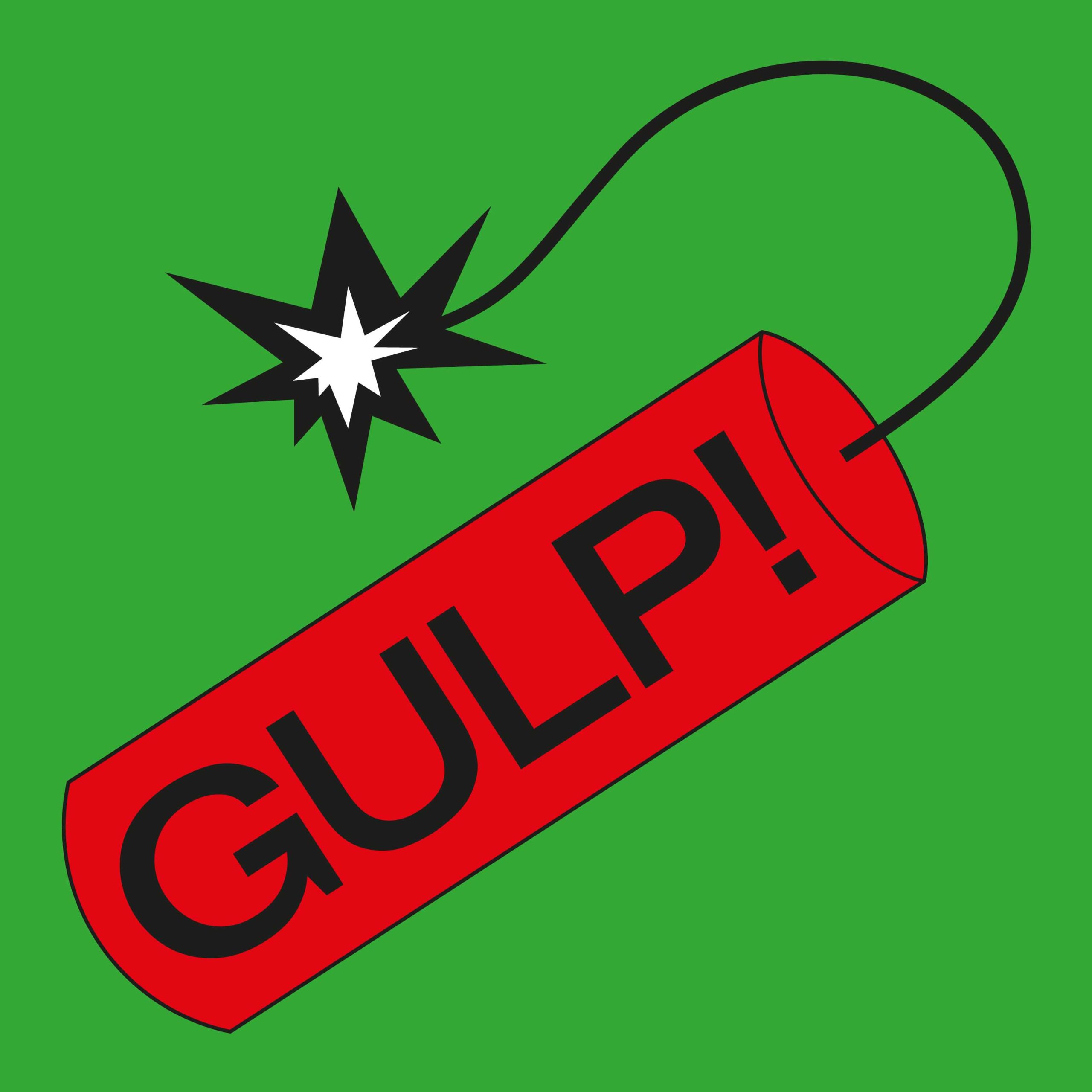 “You see so many narratives every day,” says Rob Knaggs, guitarist from Sports Team, twirling tobacco into paper with one hand. “You wake up, see a video about The Oscars and then you go on The Guardian and read about Ukraine and then you go on Instagram and see someone’s dog and someone’s birthday and it’s Mothers’ Day. There are endless clashing images and at some point it just becomes like a weird background noise to your life.”

It’s this combination – the absurdity of modern life, mixed with bleakness and humour – that sits at the heart of Gulp!, the much anticipated second record from Sports Team. It’s a pumped up, endlessly wry album, which constantly begs the question: how do we give life meaning? Nihilism and self destruction? One last drink and party before the apocalypse hits? “You’re constantly striving for some kind of model of living,” says frontman Alex Rice. “I think a lot of people grapple with that at the moment: if you’re young and living in the UK, what do you tie meaning to? I think a lot of the album’s about that.”

A lot has changed for Sports Team since they first burst onto the scene like the scrappy love children of Pavement and Pulp. In late 2020 they were nominated for a Mercury Prize for their debut Deep Down Happy. It marked a major moment for the band, who before then had primarily been known for their boisterous live shows, zealous young fans and hair-trigger sense of mischief.

“The Mercury made a difference,” agrees frontman Alex Rice. “We’ve always had quite a young fan base. We’ve always been a live ‘party band’ and generally attracted 18-year-olds. With that, for some reason, you often get bracketed as ‘Oh, this is just silly stuff.’ But the Mercury felt like critical acclaim and that felt like acceptance.” Suddenly they were being taken “seriously” as opposed to this mouthy “college rock” band – even though from their side nothing had changed, other than being able to quit their day jobs and afford a tour bus.

They didn’t waste any time after that – holing themselves up in random parts of the country (Devon, Bath, main songwriter Rob’s basement studio in Margate) – writing, rehearsing and thrashing it all out for what would eventually become Gulp! – with production from Dave McCracken (The Stone Roses, Beyonce, Depeche Mode) and Burke Reid (Courtney Barnett, Julia Jacklin, DZ Deathrays). As with their first, the tracks began with Rob “sat on Logic with a guitar” writing the bulk of the lyrics, before being taken to the rehearsal studio with the full band. Alex would then spread his easy, droll charisma over the tracks and they’d evolve again; pop songs injected with their trademark cynicism and humour.

While their debut grappled with the mundanity of middle England and suburban living, Gulp! comes at you from a different angle entirely. The band aren’t in their hometowns anymore and have since spent a lot of time on the road, playing shows and living the band life. “We were writing about our experience growing up, commuter towns in your early 20s and that sort of existence – it feels really novel for that period of your life,” says Rob of their debut. “It reflected what we were doing and how we felt.” The second was written after a period of intense change and evolution – for both them as a band and the world at large.

The result is a 10-song collection of urgent indie rock tracks that question our modes of living (“Life is just a phase, like politics and leather / And hell’s the lie they sell, to make the sinning better,” drawls Alex on “Getting Better.”) It’s neither optimistic nor overtly miserable – but it’s definitely a product of its time, with a sprinkling of pandemic-influenced nihilism. “It has felt like an endless cycle of awful stuff happening and it’s very hard to write fun sunny lyrics when you’re doing nothing and the only things you see are terrible,” says Rob. “There are a lot of life and death lyrics… I guess it was just spending too long inside, a bit too long with your thoughts.”

Musically, Gulp! veers away from the US alt-rock sound of their earlier music and towards something more emotive, with feeling – with dashes of XTC, The Bangles and their obsession, Bryan Ferry. Whether it’s the catchy, circular sound of “Dig” (not a reference to the film), the poppy and almost theatrical “The Drop” (a clear nod to Ferry’s “Let’s Stick Together”) or the morbid yet upbeat post-punk track “Getting Better,” Sports Team have managed to craft a tongue-in-cheek soundtrack to the end times (“Sometimes what you fear never comes / And sometimes what you fear never leaves,” spits Alex on “Unstuck.”)

This chaotic, buoyant pessimism is nothing new – it’s something the band have always been good at, especially when it comes to their notorious live shows. “For your fans, you are offering that moment of fun and enjoyment,” says drummer Al Greenwood. “It’s interesting, I guess, to have those lyrics that are more cynical but you know that when you perform there’ll be big moments for the audience, on a sunny festival day, feeling euphoric. That’s something from the first album that we carried forward; we still want to put on these incredible shows for people. It’s almost fun to do that in a way that’s quite dark.”

Despite the band’s cynicism towards the world at large, there are many things Sports Team feel excited and hopeful about. They have a summer of festivals ahead and on [insert date here], they will be playing a headline show at Alexandra Palace. “This does sound soppy and earnest, but playing in a band does feel otherworldly,” says Alex. “You’re part of a genuine community, something that’s bigger than yourself and I’d never felt like before [this] – you’re going on stage and you’re having that night together.”

Al agrees: “It’s physical and lived… We’re told to do all these TikToks and there’s such a disconnect between what you actually want to do and the stuff you’re forced to perform. And you get the opportunity to stand in front of that person for an hour or two and genuinely feel like you connect in a real way – you can’t be on your phone or thinking about other shit.”

“It’s a really primal thing, being at a gig.” Alex adds. “There are a handful of things like that left in the world. I think that’s the weird juxtaposition of the whole album like… have you found this weird, brilliant tonic? Yeah you can for an hour and then you’re destroyed in the morning.”