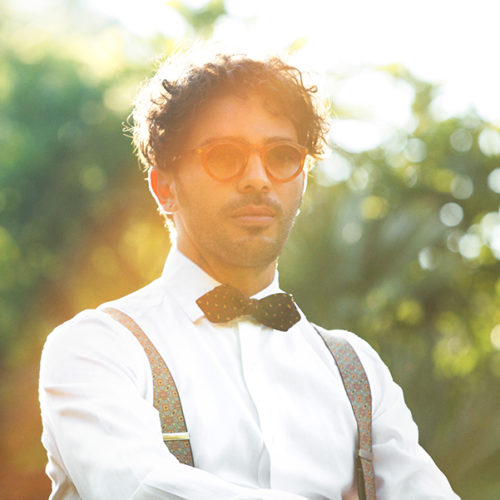 Born in Italy before studying in Puerto Rico and Cuba, a globe-trotting spirit manifested in Gabriele Poso from a young age. This also extends to his multi-instrumental and genre-hopping approach as a musician that sees him glide through continental and sonic styles with grace.

A passion for percussion was picked up early and his career has reflected this love for grooves, skipping through jazz, Latin, Afrobeat and soul. A run of albums followed, including the award-winning 2012 Roots of Soul, and as did love from the likes of Gilles Peterson and a series of collaborations with artists such as Osunlade and Louie Vega.

This latest album was born from the impulsive and spontaneous nature of live sessions with his new band, the Organik Trio. “While we were rehearsing I realised that the sound coming out was much better than what we had on the album,” he says. “It had this strong sense of character and a very unique voice. I decided to immediately stop the rehearsals and set up the whole studio for a new recording session.”

What followed were sessions rooted in the primal essence of following instincts as the band zipped through infectious Afrobeat, caramel-smooth soul, cosmic disco grooves and an eclectic yet coherent traverse through deeply rhythmic music from all across the world. The process was almost a spiritual one for Poso. “I strongly believe that music is deeply connected with who we are as humans,” he says. “This process drove us to be something different everyday, trying to understand our own personal journey in the process.”

The result on record is a transcendent one. Like being at a concert itself, amidst the whirlwind moment of musicians locked into a hypnotic state and reaching somewhere special. The intensity and vivacity of the live nature of the record is one that pulses and was ultimately at the heart of what Poso was shooting for. “I tried to capture the energy of the band that is usually only released in front of an audience during a live show,” he says. “What happens in that moment is unique, inimitable and instant – it cannot be replicated. I wanted to freeze this uniqueness and translate it into a record.”

The band were so lost in the moment of creation that when the whole first week of recording sessions were lost due to error it was impossible to replicate them. “Not one of us could remember a note we’d been playing on almost 10 tracks. It’s now become a lost album that nobody will ever listen to.”

This album, Batik, on the other hand, is very much one will people listen to. The album – which also features guest spots from the likes of Nailah Porter, Quetzal Guerrero and Nina Rodriguez – captures a time, place and spirit but is one Poso hopes will live on and can act as a unifying force outside of just the studio. “The whole album embodies the idea and concept that we all are a mix of different races and cultures that can melt to become one single and strong voice.”