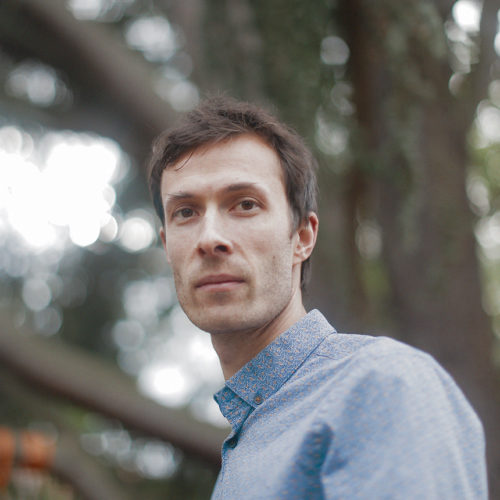 We used to enjoy presenting Chapelier Fou‘s work using the idea of music in the form of a treasure hunt. However, while the phrase in itself it still just as relevant today, we would never have imagined that it would become such an integral part of one of his albums. Or two of his albums to be perfectly exact – Méridiens and Parallèles. Two records with twelve songs each which answer each other back in the form of anagrams. They are like the two sides of the same planet – similar but simultaneously so different. They need to be discovered one after the other taking the time necessary to travel through the sound territories produced by his imagination.

The starting point is a sombre night in Uqbar…

Chapelier Fou‘s opening reference to Borgès was obviously not made by chance. He subsequently confided in us the objective of his diptych, namely to combine reality with fiction to question certainties and our relationships with the imaginary sphere. He has continued with his traditional classical-contemporary electronic approach which, although now known to a wide audience, has the advantage of opening up a whole range of possibilities right up to the infinite scale.

Throughout Méridiens, each composition can be seen as a universe in itself or a specific landscape with its own temporality. Proof of this is the introduction to the chamber music format composed for and performed by only strings which can only be given the date we want to give it. This is “État Nain” in which violins are played like guitars. In some parts we find the spirit of the Penguin Cafe Orchestra and the idea of cheering up classical instruments and not taking everything too seriously. In other parts, we find something close to a mischievous and childish unplugged grunge anthem that could be from the French series Les Shadoks. This mischievous view of things is shown to full effect in Am Scharchtensee. The introduction shows Chapelier Fou‘s whole classical universe and mastery of orchestration in which “modular” electronics provide a subtle and discreet backdrop. Then, the record suddenly switches to a surrealist dialogue between these classical sounds and modular synthesizers with the flavour of the German pioneers Kluster/Harmonia to name but one example.

The latter track ends almost like a catchy 80s melody and we can no longer find any logical meaning. We let ourselves be carried away by this profusion of madness and are a little amazed by this mastery of sound, composition and space. It sometimes all seems like a succession of conjuring tricks. Chapelier Fou takes not being serious very seriously indeed. The end song Everest trail is the perfect conclusion, a deadpan track in which the primary aspect of a totally classical melody in all its straightness is underpinned by a permanent exchange of electronic tweets which mocks the main musical posture. This impertinence harks back to Pierre Schaeffer who directed the ORTF’s very serious experimental department in another era and allowed the development of Jacques Rouxel’s series Les Shadoks thus introducing the general public to the notion of concrete music. This is also perhaps why Louis Warynski’s stage name is French – because he has opted to use his French musical heritage. Thus the first singles selected from this album, Constantinople with its groovy and jazzy allure and Le Triangle des Bermudes evoke composers like Michel Magne or Michel Colombier both of whom have totally open minds and consider all music to have the same importance, namely that of sound.

In absolutely all the tracks that make up Méridiens, you will find at least one detail – a pattern, melody, sometimes a simple sound – that will draw you back to explore it a little more. And the words are carefully weighed for sure. It’s quite simple. This is undoubtedly his most hypnotizing and catchy album. Chapelier Fou has become a complete master of his own universe. He draws the start and finish lines himself and no one can follow him in a field that now belongs to him alone.

Music is just as meaningful as the more visual arts. Therefore the artwork of Méridiens had to project each of the twelve tracks considered individually and not just the whole album as such. Chapelier Fou therefore asked his old friend the contemporary artist Corentin Grossman to create twelve windows to represent glimpses of the twelve worlds composed for the record. Windows or mirrors when it comes to that? You can never be sure of anything…

Space OK. But what about time?

The years go by and sometimes we forget that fact. But a simple glance back is often enough to gently touch the time that has passed. It is over 10 years since his first official record and he has been composing, recording and sharing his music for almost 20 years. 20 years is a long time. It makes some people look old while others fall into reassuring but sterile nostalgia. Chapelier Fou, on the other hand, has released his most ambitious project and tried to take a higher view of his discography that was itself nevertheless irreproachable.

Chapelier Fou has announced 12 additional tracks which are like echoes of the compositions on Méridiens‘ and will be released on the album Parallèles next spring. They are neither twins nor opposites – they are instead totally original new compositions which go further in exploring a universe which is already richly abundant.