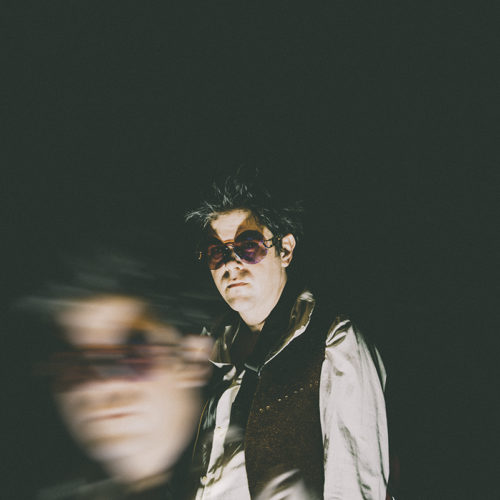 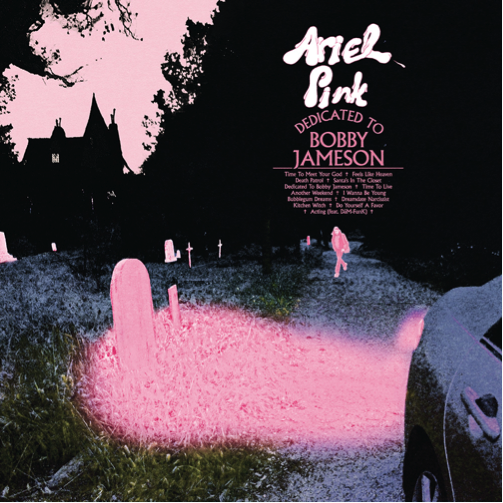 The album’s title makes a direct and heartfelt reference to a real-life L.A. musician, long presumed dead, who resurfaced online in 2007 after 35 reclusive years to pen his autobiography and tragic life story in a series of blogs and YouTube tirades. “His book and life resonated with me to such a degree,” Pink states, “that I felt a need to dedicate my latest record to him.”

Dedicated to Bobby Jameson begins at the end and ends at the beginning. “We follow the protagonist through a battery of tests and milestones, the first of which sees him reborn into life out of death,” Pink explains, referencing the opening track “Time To Meet Your God.” “From there, he seesaws his way between the innocent love and the rock-solid edifice of childhood-worn trauma that together constitute his lifelong initiation into the realm of artifice and theatrical disposability.”

Raised in Beverly Hills, Ariel Pink (born Ariel Marcus Rosenberg) started out as a visual artist before becoming a recording artist in the late ‘90s while attending Cal Arts. Between 1996 and 2004, he honed his craft writing, performing, recording, and producing a body of work that was experimental, impressionistic, and improvisational—often creating melodic accompaniments and percussive elements with his voice, as opposed to traditional drums or drum machines.

In 2003, Pink attracted the attention of Animal Collective’s Paw Tracks label, earning his home recordings a small and devoted fan base through a series of limited edition reissues. Drawing upon a list of long-forgotten iconoclasts and trailblazers like the Shaggs, the Cure, the Velvet Underground, Destroy All Monsters, the Godz, Cabaret Voltaire, and R. Stevie Moore, Pink set himself to the task of redefining the musical lexicon for himself and others. “This mission,” he says, “remains mine to this day.”

Though critically misunderstood at the time, Pink’s lo-fi recordings wielded an enormous influence with insiders and outsiders, earning him the unsolicited distinction as “the godfather of chillwave” and the face of the emergent genre of Hypnagogic Pop. Upon signing to the landmark record label 4AD in 2009, Pink’s fortunes with critics began to reverse, and his resulting first single, “Round and Round,” was named the #1 Record of 2010 by Pitchfork.

Since that period, Pink’s influence has grown, even as he and his work have waxed and waned within the popular political conversation. His music, in its earnest genre drag, continues to polarize. His embrace of the dark edges of human folly and despair is juxtaposed with superficial joy, touching on aspects normally avoided in pop music like sarcasm, suspicion, nihilism, self-loathing, and denial. These shadows of the self make their brighter counterparts—love, desire, nostalgia, dreams, acceptance, and epiphany—all the more transcendent, striking deep chords of emotion with fans. In his frenzied portrayals of humanity’s baseness and beauty, Ariel Pink spins pathos into paradise.

Standout tracks from Dedicated to Bobby Jameson include “Feels Like Heaven,” a lovelorn insta-classic paying tribute to the promise of romance, “Another Weekend,” which encapsulates the lingering euphoria of a regrettable weekend over the edge, “Dedicated to Bobby Jameson,” a rah-rah psych romp paying homage to L.A.’s punk history, and “Time to Live,” an ironic anti-suicide anthem that promotes survival as a form of resistance before devolving into a grungy, “Video Killed the Radio Star”-style breakdown that supposes life and death as being more or less the same fate and embraces the immortal anarchy of a rock song as an alternative to the prison of reality.

Alternately contained and sprawling, Dedicated to Bobby Jameson is a shimmering pop odyssey that represents more astonishing peaks and menacing valleys in the career of a man who, through sheer originality and nerve, has become an American rock and roll institution. The album marks his first full-length release with the Brooklyn-based independent label Mexican Summer.